In the framework of INOWASIA project, the research group from the Key Laboratory of Advanced Materials for Green Growth at Vietnam National University have developed an environmentally friendly and safe material from laterite naturally abundant in many areas in Vietnam by using thermal treatment process to remove impurities and increase the surface areas of the treated materials. The latter was then used as an adsorbent for the purification of rainwater to produce drinking water. The developed adsorbent was applied in a combination system of collecting, preserving, solar heating, and purifying rainwater as shown in the figure below. 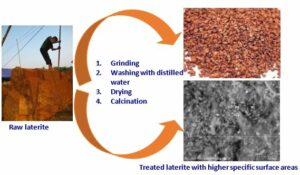 The outcomes revealed that all the water quality parameters were below the limits of the national standard for drinking water (QCVN 01:2009/BYT), especially all the Coliform and E. coli bacteria from rainwater (due to contamination from roofs, water pipes and reservoirs) were safely removed by the system, implying that the combination of rainwater collecting, solar heating, and adsorption/purification system is suitable to produce drinking water in rural areas, helping inhabitants in countryside and rural areas overcome water shortage issue by using locally available materials and with a sustainable approach.

The findings in this research have been submitted to the Journal of Water Resources Development (Taylor & Francis).

For more info check the Hanoi University of Science website.